On Tuesday we dropped the #Catquarium. Check it out, two hours in a 360º cat cafe which you can watch on just your cell phone. No headset required! 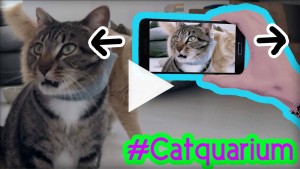 Check out the 2500-word article in Nofilmschool about how it was made, and some of our press:

“The Catquarium is our favorite by a fluffy mile.”
– Gadgette

“What better way to blast through Wednesday than spending two hours with a room full of cats? Nothing! Nothing is better. […] You have full control of where the camera goes. Wanna go stare at that cat that’s rolling around in his food for some reason? Have at it. Interested in that odd woman in leopard print and cat ears? Keep an eye on her, then.”
– The Daily Buzz

“The video also claims to be “the biggest cat video in the world,” with a whopping 1 trillion pixels.”
– Gizmodo

“For those of us allergic to Garfield and gang, we can visit KitTea Cafe without sneezing into our Earl Grey via this interactive video […] who is more entertaining — the felines or the hipsters playing with them?”
– Cnet

“Featuring feedings, playtime, and laser pointer theatrics, the video puts viewers right in the middle of everything.”
– Mental Floss

“And I stayed in the Catquarium until my phone died last nite! Way over an hour. SO amazing! SO surreal! SO mysterious! Probably I was there for 90 minutes or so…
You know who my favorite kitty is! Hint: she’s wearing a leotard!”
– Mom

“It was something to experience through the youtube app. Completely immersive I think people on BART thought I was nuts moving it all around until i realized I can scan by clicking”
– Joe

I’m hosting a discussion on Jan 7 at The Embassy in San Francisco called “Planning and Flaking: Can We Do This Better?” Here are some thoughts to start the discussion: The year is 1957. You’re sitting on the couch, eating a string bean casserole and finally getting around