I don’t usually post movie reviews, but this film was so spectacular and at the same time disturbing that I felt compelled to. tl;dr: You must see Gravity in IMAX 3D, but the script has flaws. (Warning: this post contains spoilers AND criticism. Don’t read it if you don’t want the movie ruined.)

I saw Alfonso Cuarón’s Gravity last night in IMAX 3D at Lincoln Center, and before I get into my rant I have to say that it was spectacular. I was sucked into the environment and for an hour and a half, was fully transported into space: on a shuttle, in orbit. It was as close to real as I could ever imagine a film on a screen to be. The cinematography was exquisite, the imagery  amazing. And Sandra Bullock’s performance, especially given the constraints of  holding her body in strange positions while acting as if she was not, was stunning. I wouldn’t argue with a Best Actor or Best Director oscar at all.

Okay, that’s out of the way; there are glowing reviews all over the internet. What surprised me most was how few reviews I could find that echoed what bothered me about the movie. 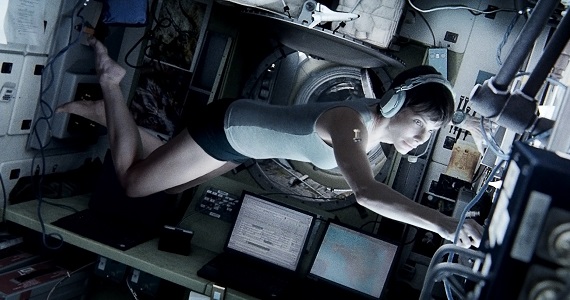 Let’s start with Bullock’s character Ryan Stone. Even with the curious choice of giving her a man’s name, the screenwriters gave her the personality of a typical, stereotyped, Hollywood woman. She had no jetpack and ability to propel herself. She was prone to emotionality and fear. She was inexperienced. When faced with a problem, her first response was to lock up and panic, and she hardly ever approached a situation calmly and with intelligence.

More or less the only character detail we are given about Ryan is that her daughter died young and she is heartbroken. With barely any further information, this one struggle does its best to prop up her entire character, to the point that it becomes a parody of a Hollywood character arc. It’s the reason she can’t go on, the reason she cries, the moment of bonding between her and George Clooney, and the reason she decides to move on. “Your daughter” is waved as a magical flag that seems to flatly declare “Yes! This entity is a human with emotions and you should relate to her!”

Aside from the flatness of her character, I wanted to see more of a heroine. Whenever Ryan has a moment to herself she pauses, reflects, and waits for the next disaster to strike. Whenever disaster comes she is unprepared. She is pushed, pulled, and instructed by George Clooney. She barely knows how to drive (ha!) the re-entry shuttle. In the most climactic moment, when she almost decides not to go on, what presses her on to continue? The film needs to *resurrect* the male character so that he can order her onward. It is only with his insistence that she comes to the resolution to keep on. When she does, it feels more like following orders than making a decision.

What kind of world are we living in where Sandra Bullock is the most phsyically fit, hardest-working and most successful woman on the film, and she does it all to play someone who can’t get her mind together for even a second to take control of her own situation. The disparity between the real-life Bullock and the onscreen Ryan is shocking. Is this really our heroine?

And then there is George Clooney’s Matt, a one-liner spouting “it’s gonna be a wild ride!” cowboy jock who doesn’t really have much nuance himself, come to think of it. 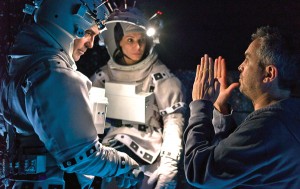 This is Hollywood storytelling.

The heavy-handed score, composed by Steven Price, told us exactly when we were supposed to be worried, afraid, sad, and excited. It dripped over every emotion like a candy coating, and I don’t remember being annoyed by a score so noticeably heavy since the 1990s. It stuck out because it was so unnecessary.

Midway through the movie, as Bullock was careening through space untethered and inches away from missing her spaceship, I whispered to my friend, “could they just once have her grab onto anything but the *last possible* rung?” I’m pretty sure that literally every time she is in danger, she escapes at the last possible moment. My gripe is not about realism, it’s just — why? Why call attention to the storytelling by making it so obvious?

Cuarón said that he wanted to pay homage to the space documentaries, which have long single takes and are stark in their realism. I saw that homage in the cinematography but nowhere else in the film.  Y Tu Mamá También is one of my favorite films, in part for its subtlety and nuance, and there is none of that here.

It’s easy to forgive the cheesiness in light of the film’s monumental achievement elsewhere. It’s also hard to criticize a film knowing how much effort went into it, but I wouldn’t let it off that easily. Gravity represents five years of Cuarón’s life and many more years of the lives of many others. I think we ought to expect quite a bit out of the script.

And less really is more in this case. The terror of being alone as captured by Hitchcock or the majesty of space as captured by Kubrick show us the power of silence and stillness. The gripping characters and relationships in the rest of Cuarón’s work show us the strength of well-drawn, compelling stories told without the crutch of thoughtless exposition or an overpowering feel-this-now score. And there is really no excuse for showing such a weak and helpless female character, with barely a hint of steely resolve.

I criticize because I was so blown away by this film, by Cuarón as a director, and by Bullock as an actress. It really had the opportunity to transcend, and despite being a cinematic masterpiece, I’m not sure it is a film I will want to watch again once it’s out of IMAX.

My friend Alex asked me a very simple question after the film: “Why, with so much care put into every pixel of this film, was the script so bad? Couldn’t they have put a bit more care into that?” From my perspective, there are a few wildly speculative answers to this. I make no claim that this is what happened.

The first is that Hollywood producers are creating films for an average, unknown entity called “middle America.” Almost no producer in Los Angeles really truly knows these people or spends much time with them, but a tremendous amount of reward is given to those who can accurately forecast (or build) the tastes of the average person. Many people in the business have told me that they wouldn’t watch the films that they make. The result of this is that the internal shit detector — that part of the mind that says “this line is awful, why is it here?” is eschewed in favor of the profit-detector: “this’ll give the audience chills!”

The second is that in a film with so many elements, a script really can just get overlooked. Despite the budget, there was still a small group of humans at the helm, as fallible as anyone to distortions of thought. In all the focus on the visuals, it’s easy to get the tone of the script a bit off. Also, they had so many people consulting with them on the scientific detail of the script that perhaps that overtook their attention.

The third is that this stuff is really, genuinely hard to get right. Lines that seem corny on a page can flow perfectly into a story. In a film meant to be on earth, it’s possible to rehearse and improvise scenes. An actor can say “this line doesn’t feel right” or “I don’t think my character would do that,” and it’s possible for that process to turn a mediocre script into a decent one. In a film that was pre-visualized down to every muscle movement, change is just not possible.

And then there’s just the scary possibility that this is exactly what audiences crave, and either Cuarón or some producer decided to give it to them. That a masterful, subtle film would be lost on middle America. That people need to be told when to cry. I don’t believe that to be the case.