Back when Mozilla Firefox was first gaining popularity, I used to check W3Schools’ browser usage chart, which breaks down browser marketshare as reported by a number of websites. I kept hoping impatiently that Firefox would overtake Internet Explorer. Well I just checked tonight and, as it turns out, this occurred around January, 2009. (It’s hard to say exactly when as these stats are by nature quite inexact.)

Aside from Firefox’s dominance coinciding with Barack Obama’s inauguration (no coincidence, I’m sure,) it’s notable how little fanfare there was. By the time it happened, the inevitability of the event was obvious. Firefox was launched after the browser wars had been declared over and Microsoft crowned king. How could anything dominate the monopoly browser, people asked? Since then, both Safari and Chrome have sprung up as successful browsers in their own right, and with seemingly little effort.

Here’s the graph I made: 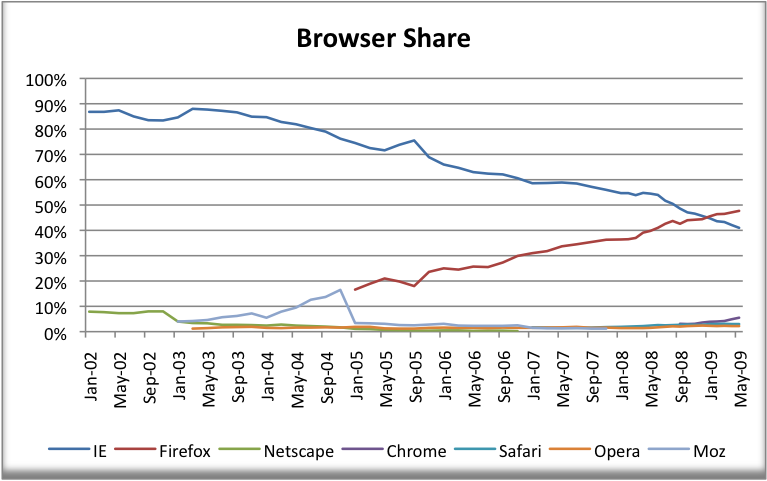 If you don’t know what it was like to develop for browsers in the early days of Firefox, it was terrible. Imagine that you are a gourmet chef trying to prepare a beautifully presented meal, but it will be served on either a plate, a bowl, a cup, or a giant vat. Unless you are very clever and creative–or very simple–your beautiful dish will get poured into a cup and turned into mush.

Internet Explorer has never supported open web standards; Opera, a not-as-popular browser, always has. Netscape never did. Even worse, a browser’s PC and Mac version would render pages differently. A developer had to use ingenious tricks to determine what browser a person was using and serve them different code based on this information. One small change in a page’s layout, then, would mean testing on three browsers on two operating systems.

In the time right after Firefox’s introduction, we had an even worse adjustment period. As much as web developers wanted to, we could not simply ignore Internet Explorer, the dominant browser. So it made our lives a living hell, rendering inconsistently and changing with each version (the complexity of the changes is beyond this blog–look at the bottom where I detail one particularly insidious change.) IE also came shipped with computers, so how were we ever going to get it off?

Thankfully, we are leaving the days where most internet users are like my father, who thought his browser was called “My Yahoo.” People are aware of their choice in browsers and exercise it. Firefox and its ilk have forced Microsoft to adapt to web standards and innovate again, and this has been much of the impetus behind the explosion in web tools. With a browser community that can support the latest developments, awesome apps like Google Wave or Google Gears have the foundation to stand on.

For the curious, I have enlarged the area with the non-dominant browsers. You can see the end of the decline of Netscape, the rapid rise of Chrome, and the slow rise of Safari. Opera has held steady and probably will – it’s a browser for geeks mostly. 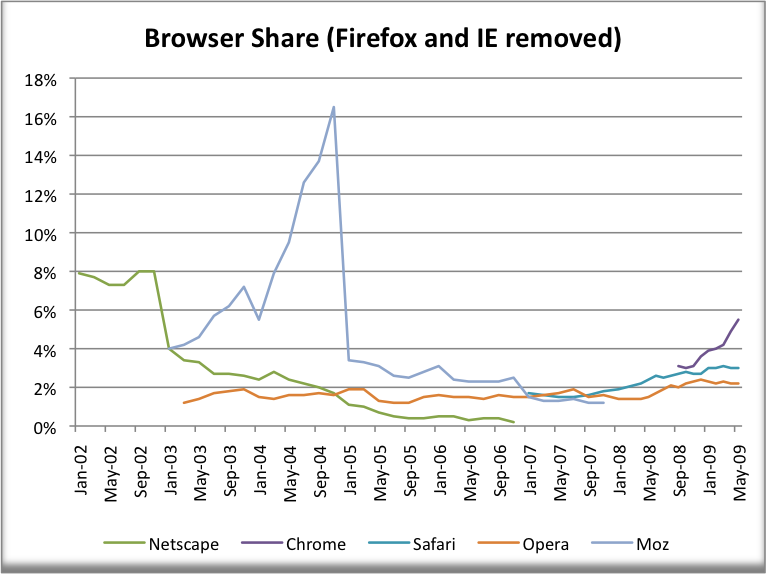 As I promised above, here is one particularly egregious change of Microsoft’s: IE6 was the end of innovation until Firefox came along. They hurriedly assembled a development team and did their best to catch up with the web standards – but they did such a shoddy job of it that only some parts of the browser were up to code (so to speak.) One of the techniques used to fix IE was to capitalize on a flaw in the browser that caused it to run code that other browsers would correctly ignore. That flaw was used to feed IE the code that would make things look right. The team fixed this error, so that IE now executed the same code as other browsers, but they neglected to fix the rendering problems. So IE acted like a standards-compliant browser and received the code for one, and then failed to execute the code properly. These growing pains are inevitable, but it would have been a real treat if IE really fixed all their problems in one fell swoop. Luckily, the days of a broken IE are mostly in the past.

You can see my file with the stats by browser here, and the original data here.

EDIT 6-25-09: My friend Sam Levine points out the wikipedia article that links to hitslink’s statistics, which show IE’s market share at a whopping 80%. Depressing, but I’m inclined to agree with this number more than my previous one.

It’s a totally subjective metric. The only way to gauge it is to count each individual visit. You can check visits by IP address to verify that you’re not counting multiple visits from the same computer and perform some other tricks to try and get a better number, but it’s not an exact science. The stats are skewed most by the group of people visiting the website – techies tend to be more likely to use non-IE browsers. Another source of skew is corporate intranets and other funky setups, which are much more likely to be using IE.

W3Schools’ data, which I used, is from a techie web design site, whereas hitslink’s data is from a statistics tracking app installed on many mainstream sites, so it likely reflects the broader trends more accurately. Still, the movement in trends are robust and it is still significant news that on some websites Firefox has recently become the dominant browser. 20% of the browser market is a sizable enough amount to keep sites standards-compliant and keep IE in line. Hopefully soon we will enter a world of strict standards compliance where any browser is equally welcome!